The only country in southern Europe not touching the Mediterranean, Portugal has always cast its gaze towards the open seas. Although shaped by its history with the Moors, Romans and Spanish, Portugal’s zenith arrived when Vasco de Gama led the age of exploration and discovery in the late 15th century to mark Portugal’s cultural imprint around the world.

See our introduction to Portugal in the film below:

Portuguese food, wine and culture are still very distinct from their southern European cousins. Some Douro vineyards contain more grape varieties than many wine producing countries and remote terrain and yet innovation punctuates the beauty to allow some fabulous tastes to be enjoyed in stunning locations.

Whisper it quietly, Portugal has gorgeous world heritage landscapes, entrancing cities and a humble but charming population delighted to see your interest in them. Discover for yourself there’s more than just port (although everyone falls in love with the tawnies) and cod. From alvarinhos with seafood to suckling pig with sparkling baga wines, Portugal rewards the adventurous. Drink it in for yourself before the crowds do. 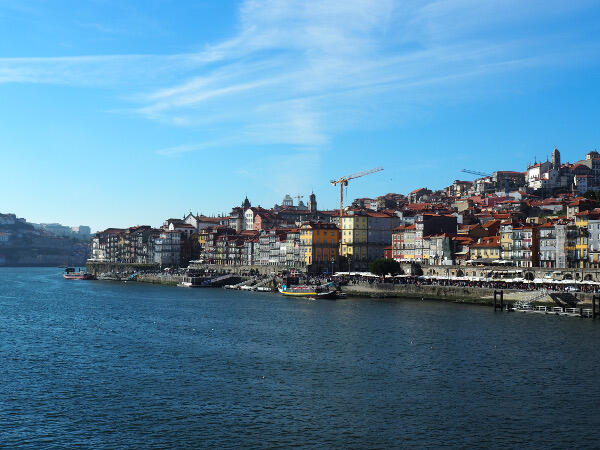 Portugal’s wine history echoed their Spanish neighbours for a long time. The Phoenicians brought the first vines to Lisbon and the Romans spread the culture of winemaking across Portugal, although at that time western Iberia was made up of Lusitania and Gaelicia. Once Portugal became a separate entity in the 12th century and then allied with England, the story changed dramatically.

Portugal is historically best known for port but is a producer of very fine wines of multiple styles, the 11th largest wine producer in the world and home to an almost unimaginable array of grape varieties. The long standing alliance with England had 2 important outcomes, it created a longstanding and reliable market for Portugal wines in England and it isolated Portugal from its wine producing neighbours in souther Europe.

When England lowered taxes on Portuguese wines and raised them on French in 1703, Portuguese wine boomed and dominated the English market. The increased demand ultimately attracted cowboy grape sellers to Porto (where the wine was shipped to England) and so the first demarcated wine region in the world was created in 1756 in the Douro to ensure the quality of the newly invented port drink (adding a dash of brandy to the wine helped its journey across the sea).

When Portugal joined the EU in 1986, things changed again and the old port house monopolies were shaken. New wine styles and producers appeared, making some fabulous red and white wines in the Douro and the foundations were in place for Portugal by 2014 to have 3 of the top 5 wines in the Wine Spectator’s top 100 list. New world style wines from the Alentejo, Barolo like baga reds from the Bairrada and crisp alvarinho whites from vinho verde country show what modern Portuguese wines can offer but the more traditional ports, fortified moscatels from Setubal and long aging reds of the Dao are more than worth a look.

The dynamic development of Portuguese wines over the last 20 years makes the stunning landscapes ever more worthwhile to visit. A little adventure in your drinking and travelling reaps a rich reward in western Iberia.

Like the country as a whole, Portuguese food always has one eye on the sea. At the grand June festivals in Lisbon and Port, you’re never far from a grilled sardine and cod features on most menus north and south. Traditional Portuguese cuisine owes a big debt to the sugar that came from Brazil in colonial times, so the custard tarts in Lisbon (pastel de Belem) and many near related deserts around the country show a sweeter end to a Portuguese meal than you’ll usually find in Spain.

As in Spain, there’s great pride in regional specialities, from the octopus of the north coast to the duck rice of the Douro, the suckling pig of the Bairrada and the stunning acorn fed ham of the Alentejo. Helpfully, the regional dishes tend to go very well with the local wines too and the proximity to the Atlantic tends to produce wines with high acidity that often conjure great food and wine pairings.

Recently, Portugal has developed a more modern edge to the cuisine and a host of Michelin restaurants smooth the gourmet roads with Jose Avillez’s range of Lisbon restaurants probably the pinnacle but the excellent Yeatman in Porto and the delightful DOC in the Douro offer other great examples of 21st century interpretations of classic Portuguese dishes.

Petiscos is the Portuguese word for tapas, an increasingly popular way to explore the variety on offer and demonstrate how simple cooking of excellent ingredients (the seafood is exquisite) can delight the gourmet traveller.

As in Spain, the development of the range and quality of styles of wine goes hand in hand with the burgeoning restaurant scene. Echoing its separatist history, Portugal offers very original flavours, gently influenced by its empires and wars. The gourmet adventurer will find Portugal a delight. Don’t neglect the port either, drink your tawny chilled like the locals and get your best dark chocolate out for vintage port, the perfect end to any celebration.

Portugal sits apart. The only southern European country with a coast that doesn’t touch the Mediterranean, its history of conquest and exploration seems a little at odds with its peripheral geography. Particularly in the south, the Moorish influence remains accords the hot dusty horizons but you don’t need to travel far north to encounter Celtic Portugal and the smallholdings of the Minho and a totally contrasting verdant landscape.

The cultural centres and biggest cities are by the sea, rural and traditional Portugal seeping further into the architecture and feel of the towns as you travel further inland. Local summer festivals are a great way to savour the culture, the San Antonio in Lisbon and the Sao Joao in Porto matching the drama and spectacle of any European city celebration. Yet, saude lurks under the surface, that Portuguese melancholy that the sailors left behind when they left on the voyages of exploration. Fado, native to the south, is a great manifestation of this, a vocal expression of the yearning for what’s lost that is deeply moving but less frenetic than its Spanish flamenco cousin.

Football is a great national passion too, Cristiano Ronaldo widely acclaimed as a hero who led the national time to their first success as European champions in 2016, although the celebrations were a little less chaotic than when neighbours Spain and Italy triumphed in recent years. The trilogy of Porto in the north and Benfica and Sporting Lisbon in the capital have tended to win most of the honours historically and matches between any of the 3 teams will stop the traffic and film the bars.

Above all, the Portuguese are gracious hosts, polite and welcoming and delighted with your interest in their country. English is more widely spoken than in Spain and hotels and meals are very good value. From the cork forests of the Alentejo to the misty green valleys of the north and from Lisbon’s ‘golden gate’ bridge to Porto’s Eiffel equivalent, Portugal will surprise and enchant you.