Jeremy Shaw tells us about how Steven Spurrier was such a great personal influence.

Steven Spurrier, who passed away recently, was an inspirational figure in the world of wine. We were delighted to spend time with him in 2020 when he was guest of honour at our 10th anniversary celebrations in Barcelona. Our interview with him is a very interesting watch. Here we share some personal recollections. 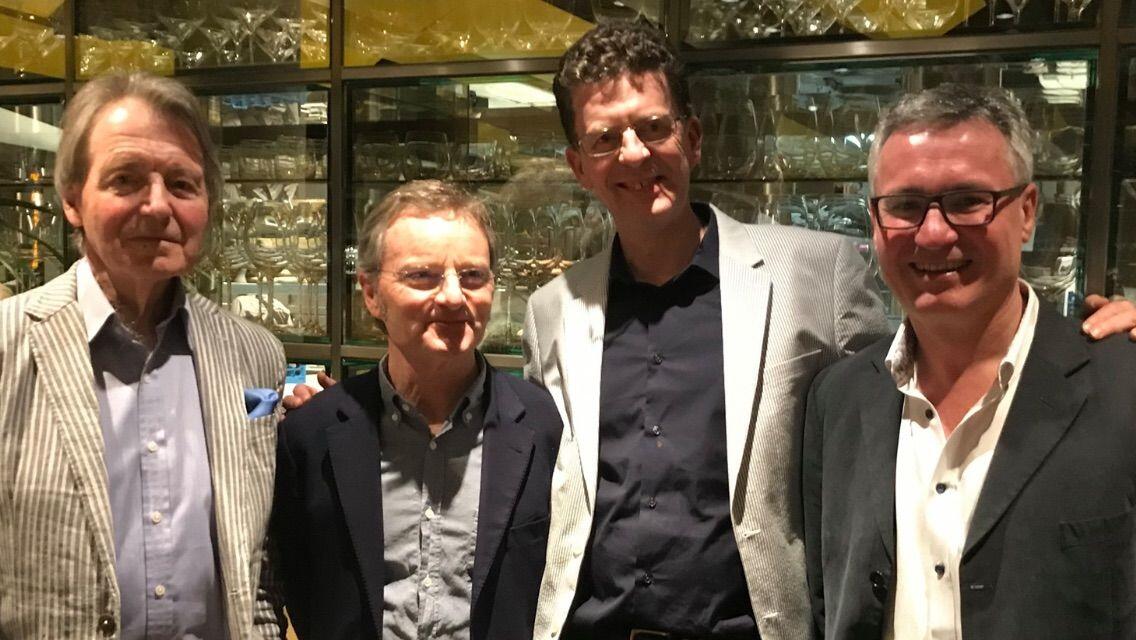 The Cite Berryer is now as well heeled as its surrounding streets that take you from the Madeleine to the Hotel de Crillon via Gucci and Hermes. In the 1970s and 1980s it was a glorious throwback, a charming but mildly unkempt passageway that housed a butcher, a boulangerie, some wine bars and restaurants and on the right hand end of the street furthest from the Rue Royale the Academie du Vin and its sister shop Les Caves de la Madeleine.

This was perhaps the place that Steven Spurrier was happiest of all, where he hatched plans for his 15 minutes of fame at the Judgment of Paris wine tasting in 1976 and where he cultivated his reputation as both a purveyor of fine wines and an educator about them too. The Academie housed a dusty bar and an upstairs salon for wine tastings, next to the shop that offered so many treasures  that were to be discovered by the French and expat clientele, from the Guigal’s glorious Lala wine trilogy to Chateau Musar, through 150 year old cognac to Torres’s Mas la Plana via Roederer Cristal,  Krug’s Close de Mesnil and of course the full selection of the Bordeaux and Burgundy classics.

I was lucky enough to spend a summer between the 2 treasure troves, the ‘stagiaire’ apprentice carrying leftover half empty bottles of vintage Veuve Clicquot home on the metro and savouring a glass of 1975 Cheval Blanc sent round from the wine bar up the street. I lunched in the Hermes canteen when I wasn’t sampling wines in the back of the shops and entertained the British and US ambassadors in the shop between visits from that year’s Chanel girl and the Rothschilds preparing for a cocktail party.

It was enough to spark a lifetime love of wine and the stories around it. There was magic in the Cite Berryer, later to be eclipsed as the Academie was sold and the street was gentrified. Steven moved on, as before and after, next to Christies and then Harrods in London and through many more ventures until he started making his own sparkling wine in Dorset. This was the final chapter in a glorious but rarely lucrative wine career that was punctuated by his last act, the setting up of the Academie du Vin Library, which sets out to publish books that tell the stories behind wines.

We were so fortunate to enjoy Steven being our guest of honour at our 10th anniversary dinner in Barcelona in February 2020, dapper as always and charming all the guests as he milled around signing copies of the Academie’s books that we were presenting. Even better, we managed to source a good supply of Bella, the delicious sparkling rose from the Bride Valley estate that Steven named after his wife.

When we raised our glasses to Steven and Bella as we drank the wine he’d made for her, it turns out that our toasts were so much more poignant than we realised at the time. If only we’d realised it then, we were celebrating the end of an era, thanking them for all the treasures they had brought to the wine world. I was whispering my thanks to Steven for opening that dusty door in the Cite Berryer to me and for all that it has subsequently revealed. As Steven mentioned in our interview in Barcelona, the Academie du Vin was perhaps his proudest achievement. We seek to emulate Steven’s boldness, curiosity and sense of fun on our tours as we uncover the stories behind the glass in your hand. Most of those stories emanate from that soulful corner of the Cite Berryer. Merci Monsieur Spurrier!